On the back it says:

Hopefully, I will scare the sinister people in Malcolm’s neighbourhood and if the AFP let me stay, there may even be a sighting of the ghost of Turnbull’s leadership. As our Prime Minister will be in Israel, perhaps his servants will join me in the hunt for Turnbull’s spine but I may just end up with a cauldron full of broken promises.

Then on the Day of the Dead, November 1st, I’m going to hop on my broomstick and haunt the streets of Mal’s Wentworth electorate dressed as a bat in a Barnaby Joyce mask. Anyone want to help me trick some very spooky politicians?

Remember to eat, drink and be scary 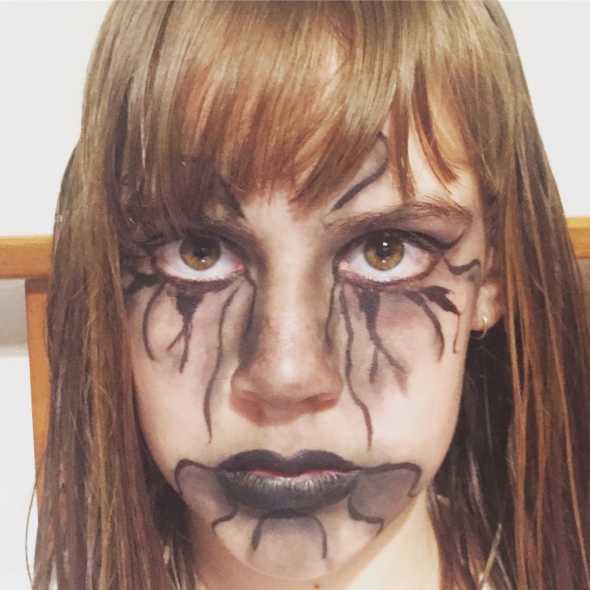 There’s a name for it

I received an email yesterday:

We are worried about the future of your mortgage

What mortgage? I thought as I lay awake at 3am. Then I found out that there’s a name for the cause of my insomnia: housing poverty. I pay 65% of my income in rent every week. I’m not in debt but I’m about three pay days away from severe financial distress. So most nights I wake at 2am wondering how I’m going to manage and stay awake until 4am.

Housing poverty occurs when people who fall in the bottom 40% of wage earners put more than 30% of their weekly take-home pay into housing, which reduces their capacity to save money and thus their financial resilience.

According to an analysis by the Council to Homeless Persons, those paying rent alone on the average weekly wage for women would be priced out of all but one inner Melbourne suburb and even outer Sydney.

Jenny Smith, the chief executive of Council to Homeless Persons and chair of national peak body Homelessness Australia, said the situation for many single women was untenable and left them vulnerable to homelessness in the event of a crisis, like losing their job or a high medical bill.

“When you look at your average single woman on an average wage, you can see it’s very, very difficult to rent anywhere reasonable,” Smith told Guardian Australia.

“If you do, you are essentially putting yourself into a poverty situation.”

Sydney is a wonderful city, offering so much, but how can we revel in art and music and the joys of life when we financially stressed to breaking point? Single motherhood can be an exhausting cycle of taking time away from work to focus on motherhood, then overworking to earn enough money to pay back debt. And this is compounded when children have any kind of health issues. Maternity leave when kids are small and most need an involved parent impacts women’s ability to earn enough to support their children. My financial stress is caused by:

Single working women on average wages in Sydney and most of Melbourne cannot afford to live alone. Men can. Does that seem fair to you Bernard Salt? I’m going to keep eating smashed avocado as I can’t pay for my own home with room for all my kids. Oh well. I could possibly live in a bus shelter when I’m old and it will be peaceful sharing with our cat.