The year my brain broke

2015 was a year of hard work, heartbreak and incredible joy. Some people I love and admire endured tragedy this year, we lost more friends to cancer and many of my friends lost parents.

In March, my Clown Doctor colleagues, Dr S. Duffer and Dr P. Brain and I had a lovely visit to Sydney Children’s Hospital with three members of the Australian cricket team, Brad Haddin, Nathan Lyons and the captain Steve Smith. Lovely blokes who spent hours with very sick kids, told corny jokes and when we took the mickey out of them they were great sports.

My mum went to live in a nursing home

In November I travelled to Queensland to giggle, train, sing, laugh and be inspired by my Clown Doctor colleagues from around Australia

In December, I kissed a few babies, met Fred Nile and stood for the federal seat of North Sydney for The Arts Party. About 2% of the electorate voted for me

Then I spent an incredible night with Dr Boogie at Taronga Zoo for Dreamnight, and a week later flew around Sydney with a bunch of amazing families on a large QANTAS jet then had a joyful day at Bear Cottage

White Australia failed to acknowledge Aboriginal people in our constitution

Sharks ate lots of humans this year, Adam Goodes retired and despite finding a Boeing flaperon, MH370 is still missing

In Paris, Syria, Beirut and Afghanistan innocents were murdered and suicide bombers went off

I spent another wonderful year being a fool in hospitals in the presence of beautiful families, while the mothers of MEB helped me parent. 2015 has been an exhausting and inspiring year of madness 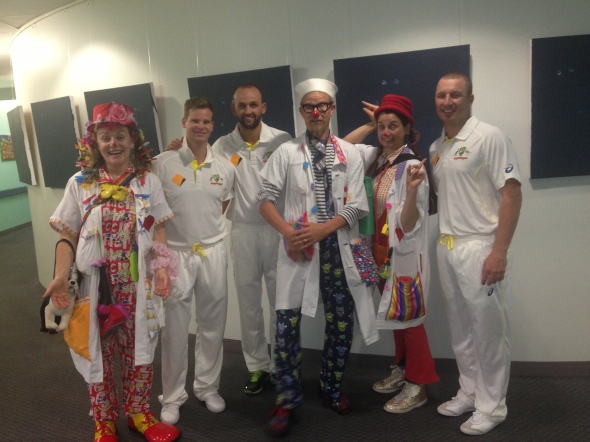 Today the people of North Sydney must decide who will represent them in Canberra in the House of Representatives. MP Joe Hockey retired early, which meant a by-election costing taxpayers approximately $1.5 million had to be held, even though there will be a federal election sometime next year. There are 13 candidates in today’s poll, ranging from strong independents to more of the same white males, to new faces in brand new parties, passionate about bringing new ideas to the Australian political landscape.

I’m really hoping the fine people of the lower North Shore vote for change, that they put their faith in a candidate with fresh ideas not the one with the huge budget for self-promotion and out-of-date policies. I hope they’ll vote for a candidate who wants to recognise indigenous people in our constitution, improve our environment, and make education, health and the arts as their top priorities and the woman who will best serve the electorate.

I’m the first official candidate for the Arts Party in the federal seat of North Sydney for the by-election to be held on Saturday December 5th.

No, I haven’t gone mad, I think that the only way to change the world is to do my best to make Australia a more creative, educated and cultured country, especially in an area that has been ruled by conservative male politicians for a very long time. There are 13 candidates standing, from the Bullet Train party to Clive Palmer’s PUP candidate and Fred Nile’s Christian Democrats. I’m hoping that the electorate is ready for someone different to the pale, balding males in blue suits. I’ve been learning a lot since I decided to run, and last weekend as I campaigned for the first time in North Sydney, I found that the locals are sick of party politics and pettiness getting in the way of good decision making.

There are a lot of small independent parties and candidates running and the incumbent party have a lot of money to spend on focus groups, calling their constituents and marketing. I’m hoping one of the parties will start a juicy smear campaign and the fun will really begin.

Why pay money to have your family tree traced; go into politics and your opponents will do it for you – Author Unknown

Here’s a list of all the candidates, I’m number one on the ballot (really the luck of the draw)

If you live in North Sydney please vote for me so I can make some real changes. And when it comes to my opponents, in the words of one of my favourite comedians:

Don’t vote, it only encourages them – Billy Connolly