Educational genius Maria Montessori was born on this day in 1870. A woman far ahead of her time, she went to medical school then began her quest to educate young minds. A single mother whose father was sceptical about her work, Montessori believed that, “The child is both a hope and a promise for mankind.” In a year when too many children have died in bloody wars started by male warmongers, her words have never felt more true: “Peace is a practical principle of human civilisation and social organisation that is based on the very nature of man. Peace does not enslave him; rather, it exalts him…. And because it is based on man’s nature, it a constant, a universal principle that applies to all human beings. This principle must be our guide in building a science of peace and educating men for peace.”

I’m sure this is legitimate

I’m so thrilled! I’ve just received an email from the lead singer of one of my favourite bands. I can’t believe Paul Weller sent me an email. I didn’t know he had a connection to The Abu Dhabi Families. Paul Weller is not usually a fan of the internet but he decided I was worth his time. This is the single mother get rich quick scheme I’ve been looking for

I am Paul Weller, Abu Dhabi Investment LLP; a business developer, stock broker and portfolio Manager. I went through your profile and will like to develop a business partnership with you; The Abu Dhabi Families are interested in investing seven to eight figure British currencies.

The reason why I have contacted you is because, we are specially interested to invest in your Country and after checking the world business directory, I decided to contact you, I will like to keep the details short for now. If you are interested and have a project worth investing on, kindly reply to this email. Do not forget to include your direct cell phone number and the best time to call you, in your reply. I will call you to discuss the modality and other details once I get a reply from you.

I am looking forward to your response and working with you on this Investment project.

As I am on the hunt for a brand new Mike Brady style husband, I wonder how I’ll adjust to living with Mr Stepfather and his children when they find me. I’ve been thinking about different parenting styles:

Apparently parenting in the 50s was: Wait ’til your father gets home. Then parenting in the 60s was: Go to bed or I’ll whack you on the bum. A popular 70s child rearing plan was: Go to a party, drink a lot, chuck the kids a bag of chips and a can of Fanta every few hours, end up at 3am kicking the dog into the neighbour’s pool. Wake up on the front lawn underneath the frangipani tree. Throw six sleepy kids you found on the front verandah in the back of the station wagon and give the car keys to the adult who appears most sober.

The popular parenting style in the 80s was, “Julie’s dad is not too pissed to drive, I’ll get him to pick up you and Vicky from the Blue Light Disco.” No wonder we learnt to get hammered at every opportunity.

According to social researchers parents began to spend a lot more time with their kids after 1995, so parenting in the 90s became, “Sit down and watch the Simpsons with me while I have a drink.” In the 21st century parenting has become: I share custody with her and her, so I’d better find a new childless girlfriend to help me when my kids come back from their mothers’ houses.

Today the Australian Clown Doctor community say farewell to our beloved leader, ever-smiling, humble, generous, warm hearted Peter Spitzer, the son of Czech Holocaust survivors who became a doctor then started The Humour Foundation charity in Australia. In 1996 I remember sitting in the gym of a sweaty police boys club in Erskineville with a handful of other fools while Peter explained what a Clown Doctor program could look like. Peter’s vision made our work a reality. Over the years I had the privilege of working with Peter at Sydney Children’s Hospital, The Children’s Hospital at Westmead and Royal North Shore Hospital, as well as sharing meals at our conferences and hours doing workshops and training where he taught us more ways to help those suffering. We were always inspired by his love for all the fabulous families we are lucky enough to meet in our hospital Clown rounds. Peter Spitzer approached all human life forms with an open heart, eager to learn their stories, connecting with everyone, young and old, whether the head of the hospital or a small kid in need of some distraction. He had the sharp mind of an eager scientist, always enthusiastically sharing his findings with us, always looking for ways to better our work.

My years as a Clown Doctor were punctuated by visits to Peter’s house after the Bowral Ball, where he worked his magic and made people laugh, while the lovely locals raised money to continue our programs. I treasure the memories of staying over at Peter’s house afterwards, and grand breakfasts with Peter and his darling wife Judy as we discussed our work and new ways to fundraise with his beautiful band of supporters. Later I was lucky enough to work with Peter on the pilot Elder Clown program, where Peter shared his passion for making life better for adults living with dementia.

Dear Doctor Fruit-Loop (see I didn’t forget the hyphen) you gave us a purpose for our work. You never grew tired of seeing the joy on a sick child’s face. You gave our performing lives so much meaning, we weren’t there to show off, we were there to empower sick children and frail elderly people. It is always about them, not us. Clown Doctoring is not a job, it is a calling, and you showed us the way. We are so sad you have left us but we vow to continue your work, we want you to be proud of us. Adios Doctor Fruit-Loop, I will think of you and the twinkle in your eyes when I carry far too many props in my coat, whenever I see a rubber chicken, or see a child’s face change from fear to laughter. I’m so glad I told you how much we all loved you the last time i saw you. I have a job and a life of meaning thanks to you. Thank you for sharing your gifts with us, you have left a magnificent legacy. 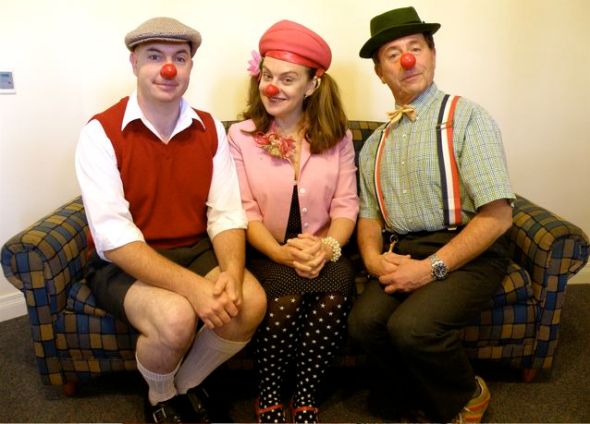 We’re not laughing at you – we’re laughing near you

When my colleagues and I tell people we are Clown Doctors people usually say, “Oh like Robin Williams in that movie? What was the name of that film?” Patch Adams, and he’s a real doctor and a funny person. Thank you Robin Williams for bringing the idea of taking humour therapy into hospitals into the mainstream.

I first fell in love with Robin Williams when he starred in Mork and Mindy. Then I saw him live at the State Theatre in Sydney in the late 80s and I couldn’t believe his talent. To be in the room with this rapid fire stand up comedy genius was incredible. Then he starred in movies.

They’re not that different from you, are they? Same haircuts. Full of hormones, just like you. Invincible, just like you feel. The world is their oyster. They believe they’re destined for great things, just like many of you, their eyes are full of hope, just like you. Did they wait until it was too late to make from their lives even one iota of what they were capable? Because, you see gentlemen, these boys are now fertilizing daffodils. But if you listen real close, you can hear them whisper their legacy to you. Go on, lean in. Listen, you hear it? – – Carpe – – hear it? – – Carpe, carpe diem, seize the day boys, make your lives extraordinary.

Thank you Robin Williams for sharing your gift with us, for your wonderful films and all the laughter and tears you gave us. I hope you realised how much you were loved. I’m sad that your demons became too much for you to bear. In these dark days, the world needs laughter more than ever. Nanu Nanu

I’m putting on another solo comedy show for Sydney Fringe Festival in September. My show is called Looking For Mike Brady and it’s all about what a hot catch I am for a wealthy architect (not really). At this time of year I usually look at my script and say to myself, ‘I hate it, it’s not funny, what a load of bollocks, what am I going to be when I grow up?’ But I’ve decided to do my show anyway because it gets me out of the house to hang out with a few friends and drink champers. Please come and see my show, it is yet another of my fabulous single mother get rich quick schemes.

Bring your best laughs to the Factory Theatre in Marrickville (the home of Fringe Comedy) for 2 nights, Wednesday September 24 and Friday September 26

Found a potato on the couch #cats ❤️