Vinnies and Salvos may not agree but I’d like to say,

I laboured through a summer party with pill popping friends who became obnoxious, so this year I won’t be answering their calls

Folding up Dutton, Morrison and Abbott at the next election will help my thoughts become clear

Parking cops don’t speak to my heart, out they go

Throwing out “joyless” items originally struck me as a first world problem. But the end result may be that the world is made better

Hardly any bottom of the budgie cage seeds on my veggies

An absence of life hacks

A teaspoon of resolutions

A plethora of politicians who think before they speak

Truckloads of hot firies turning up at work

Yesterday there was a by-election held in the electorate where my children go to school. At the polling booth, I asked an older Liberal party member who was handing out how to vote cards how he could campaign for climate denial when the science is clear. He asked me a question about H2o or Co2 levels in the atmosphere then told me off for not knowing the answer.

“You should educate yourself,” he said.

“I believe the scientists,” I replied but because I couldn’t answer his science questions he laughed. My brain has never retained STEM facts so that’s not proof that global warming doesn’t exist, it’s proof that 99% of the time my mind is off with the pixies dreaming up single mum get rich quick schemes, and maths and science are not my strong point.

When I said to him, “How about your party find some strong policies instead of incessantly bitching about the Opposition?” he told me I didn’t understand science. He is right but I clearly understand that I don’t want our beautiful environment destroyed by corporate and political greed.

Even a former Liberal Party leader stated the day before the poll: “You forfeit the right to govern if you don’t have a climate action strategy.”

A few hours later the Government lost a safe seat they’d held for 117 years, and the Prime Minister gave a tone-deaf concession speech attacking opposition leader Bill Shorten and people on welfare. I’m no policy-maker but here are a few ideas if they want to stay in government next year:

Where 45% of the electorate are renters, don’t talk to us about negative gearing. Overpaid members of parliament have used Australians on low and below the poverty line income to buy and push up house prices. We are sick of subsidising wealthy politicians who manipulate the property market. Let’s remove this rort.

We’ve had three conservative Prime Ministers in two and a half years, so perhaps don’t mention stability and certainty in your election promises. Nor economic management when you’ve tripled the deficit and refused to help low income families in the five years you’ve been in power.

And let’s not mention the NBN debacle.

The conservatives have now lost their majority in the lower house. Maybe with a hung parliament we can get the kids off Nauru without having to go to court.

Liberal party, it’s not 1954, you could try listening to voters. All over the world, educated people are living to the 21st century. Wentworth liked the guy who you kicked out of the job, so they decided to elect a progressive independent doctor who believes in climate change. Maybe your party can’t attract women with integrity because no intelligent lady would join your gang of dinosaurs. Scott Morrison, try inspiring our country with visionary ideas, you currently sound like a used car salesman trying to sell us a clapped out, dodgy lemon. Your hollow words are (went) worthless

Thank you for your time

We hope you enjoyed your stay in our hotel. Please fill out this survey so we can judge your level of customer satisfaction and we can annoy our staff with ridiculous statistics about their performance, even though you had one conversation with them that lasted all of two minutes. These surveys will take longer to answer than your actual stay in our facility.

In a few days we’d like to call you to discuss the results of our tedious marketing logarithms.

Don’t call me when I’m feeding my kids

Don’t call or email me when I buy a new phone, change my plan, check out of your hotel, buy groceries, fill up the car, change a frigging light bulb!

Please join our social networking channels, which have content about as interesting as having a pap smear. Enough. There are too many places to waste time already, I’ve lost track of the names:

How about we all go to a party down the road and argue in real time. I’ll bring a pie

Am I really a single mother?

Happy Mother’s Day! Single mothers will now have to provide ‘verification’ of their relationship status in order to claim Centrelink’s Parenting Payment Single. Single mums who leave parenting Payment Single and then return to the payment will also have to send the Human Services Department a photograph of themselves sitting alone crying into their one glass of Aldi wine on a Saturday night.

“From 20 September 2018 new claimants seeking Parenting Payment (Single) or single parents claiming Newstart Allowance will be required to have a third party sign a new form verifying that they are in fact single, then we can tattoo their scrawny necks and microchip them before we release them back into the wild,” the government announced as part of the 2017 Budget this week.

To be rewarded with vast sums from the government’s welfare-bludgers’ prize pool, I will have to find someone whom I don’t want to share the horizontal tango with, to verify that I am in fact raising my children single-handedly. I’m really not sure who I’m going to ask to help me with this. Will it be the merchant banker who picked me up at an art gallery and then took me on an incredibly boring date? The 22-year-old man working at my local servo who thought if he gave me a free juice and a bag of chips, that I’d go on a date with him? The guy who sent me ‘sexy’ pics of himself late at night on Facebook while his wife was asleep? He may be my best choice. Hopefully, he’ll get confused and tell the authorities that he and I have been shacked up for years with my children, his kids from three relationships, our cat and a feral budgie. Apparently, the penalty for making a false declaration is up to 12 months in jail. Which could mean I’m in for a nice break (Wentworth prison here I come) from mothering and working if my dreamy battler beau brags about our imaginary sexy times on social media.

“This is offensive and deeply disturbing,” said Terese Edwards, chief executive of the National Council of Single Mothers and their Children.

“Who verifies? Do children get asked? Is there a neighbour watch alert? This is a slippery slope back into the dark days. I’m proud of our single mothers, they are doing a damn good job and don’t need the burden of Government prejudice.”

Terese is right, single mothers are doing a damn fine job, they’re the hardest workers I’ve ever met. But I quite like the neighbourhood watch idea as I’m a bad picker. I could have a panel of people telling me if I’m going out with the wrong dude. My neighbours could shout out to me, “If you bring that guy home, we’ll tell Centrelink,” and I’d be dissuaded from making a bad move on Tinder.  Happy Mum’s Day from the Liberal Government. Scott Morrison what a generous man you are, you have saved me from a lifetime of bad relationships. I think I’ll stay home tonight knitting myself an old cat lady chastity belt. 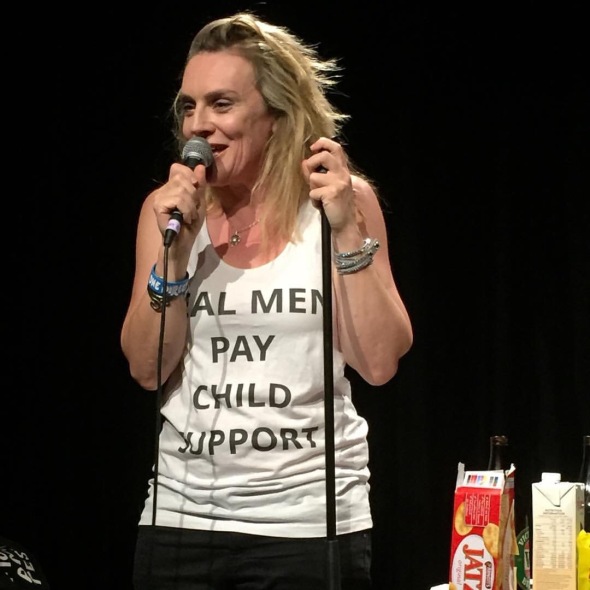 I know you’re really busy saving the world by watching people playing Minecraft on Youtube all day, but I’d like to ask a favour. Could you please catch and keep the following Pokemon people/creature/alien/thingies/whateverthehelltheyare?

Clefairy liquid over the sink and wash the dishes

Remove the Vileplume from your sister’s walk on floor-drobe

Meowth and change the kitty litter while you’re at it

Machop up some veggies for dinner

Rapidash to the bathroom to hang up your sisters’ wet towels

Slowpoke the dunny brush around the toilet

Weedle your way out of whinging about housework no more

Thank you great light of my life

Whistle While You Work – Snow White and the Seven Dwarfs

I know I’m a catch, and I’d really like to go on an exciting lunch date with you to the hot hip new bar you’re proposing and I’m very keen to pay for your brilliant plan to boost my Instagram account with 10,000 new followers but,
My legs are hairy
The cat has to go to the vet
My pouting tween has left her school uniform on the bus
The Valium isn’t working
I need a long nap
And
Unless you organise a babysitter, come and pick me up and pay for everything our blooming romance is not going to happen

Please contact me at irresistiblematch.com so you can take a ticket and join the queue of eligible males pining for me

Deluded Parenting Syndrome also known as DPS, can strike males and females. DPS occurs when a parent believes they’ve done more parenting than they actually have.

Chatting up your teenage daughter’s friends

Borrowing your children’s clothes to wear

Bringing home every boyfriend or girlfriend for your kids to meet

Telling your child you’ll teach them how to play guitar, fly a kite or build a cubby but never actually getting around to it

Telling your child all about your sexual partners thinking you’re teaching them sex education. Eww.

DPS – keeping therapists in business since Jung was a boy

As we approach a new season, I thought I’d update my 2016 resolutions. Losing weight and being more productive are so 2012. Why not try these achievable ideas instead?

Blink more
Raise my cholesterol
Stare into space, at least three times a day
Say ‘I’ll do this later ‘ more frequently
Spend more time on social media looking at photos of strangers doing things I want to do
Be more envious of others (see above)
Remove kale, coconut and slow pressed juices from my home
Wait for something to happen