Happy New Year. Hope you have fun tonight. I want a smallish glass of good champagne. At one point in my life I would have drunk tequila made from wombat wee if the bar ran dry and now I’m a one glass screamer. Mummies getting smashed is so last year.

We can learn to love again

Put it in mothballs

Autumn winds make me extra allergic to the online world of success coaches with glow in the dark teeth, perky personal fitspo gurus with Instagram famous bodies and shiny women with trout pout lips on an endless loop on Youtube. A generation of children are growing up with mothers who’ve had so much Botox put into their faces that these women cannot express the full gamut of human emotion on their dials. These zombie women scare me but I can’t stop staring, wondering when the fillers will stop working.

Then I get scratchy when I hear the words mastery, motivation, personal best, inspire, disrupt. Show me the leaders in lethargy, excellent examples of ennui, successful sloths, wonderful worriers. These are my people. To mangle Kerouac: the only ones for me are the crazies, the Bukowski drunks, the shabby, the borderline criminals, the drop outs, the dribblers, those grungy, suffering, unshaven cats who get thrown out of the best parties, the ones who always yawn out loud, the rambling, boisterous messes who convey every sloppy human emotion on their cracking apart faces. These are the people who make me feel good about myself, as I hide away at home reading, not wanting to face the world or climb any ladders.

Growing up into a cranky old cat lady, I’m pondering the autumn and winter of my life with a countenance that moves. As I slip under the radar with a face that loses its sheen every day, I think I like my mangy self best. 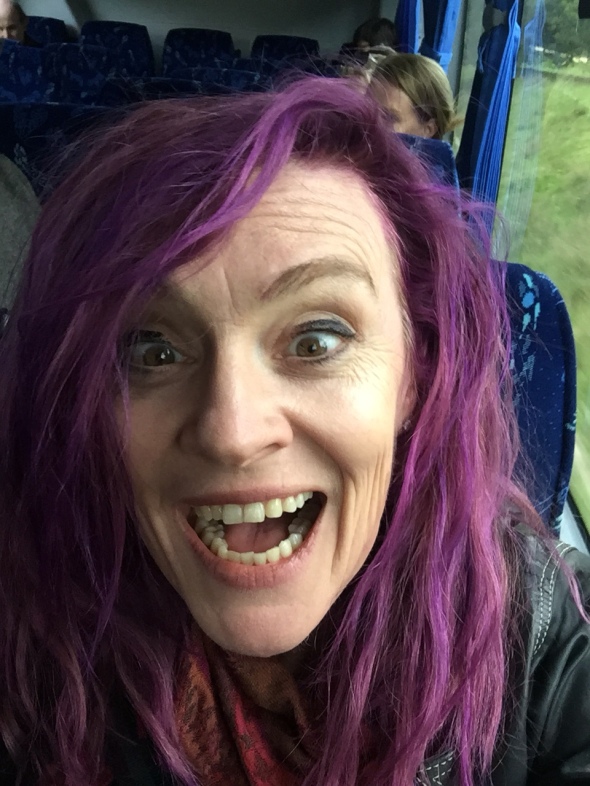 Trust me, I’m a politician

I’m hoping and praying that when I return to Australia we will have a parliament made up of a diverse group of female and male politicians, but I fear that nothing has changed. I should look on the bright side; another long torturous federal election campaign is over. There was almost a double dissolution, a budget, lots of pontifimacating about, “jobs and growth,” and eighty billion weeks of campaigning buffoons to endure.

I met a man who reminded me that voting is a privilege. “In my home country I wasn’t allowed to vote,” he told me.

Every night on TV we suffered idiots in suits who protect their mates and do very little to turn us into a clever country. Having watched them run a campaign in 2015, what disturbs me most about the Liberal party male power machine is not their political views but their lack of empathy. I didn’t hear any of them speak about helping their fellow humans in a real way. That’s a motherhood statement.

I learnt a lot standing as a politician in 2015. Don’t call swinging voters swingers at a community forum packed with senior citizens. Why did I want to be a politician? I got ahead of myself and imagined spending taxpayer dollars on homeless people, animal shelters and counselling for women victims of domestic violence. I met David Gonski. A rich banker who lives in Point Piper who actually knows how to fix our education system so it is fair to all kids, and the bastard politicians won’t even listen to him.

If I ever venture into politics again, I’ll start the single mother party. I will be the minister for cramped housing, over breeding and goon bags. If current politicians can rort their way into helicopter travel, when I’m elected every child of a single mum will receive a pony. but maybe I’ll just throw a party. Only smart people who want to save the planet can come. You with me? My slogan: Single mothers like to party. BYO cask wine and Prozac.

Spoken and authorised by Lou Pollard for the Single Mothers Like to Party Party.

The individual whose vision encompasses the whole world often feels nowhere so hedged in and out of touch with his surroundings as in his native land.

UB40 If It Happens Again

Why don’t you vote for me?

Not everyone in North Sydney would pay to meet Bronwyn Bishop.

This Thursday April 21st and Friday April 22nd, I’m performing my funny new show all about Australian politics, Vote One Lou Pollard at the Factory Theatre in Marrickville for the 2016 Sydney Comedy Festival. In this election year, come along and hear my crazy tales of politics in North Sydney.

When the other candidates are a joke, vote for the comedian

There are so many parenting books telling us confused time-poor parents how to raise our rugrats that mothers like me get lost in the blur of DIY parenting manuals. As a shortcut, here’s a few parenting strategies I’ve picked up in my 18 year journey through smotherhood:

Single mothers take a portion of each one and back off. If we don’t let our children raise themselves we will end up mummy-fied

I’m Not Bossy, I’m The Boss

As a financially-challenged single mother I don’t usually have the money to buy myself special presents but last Christmas I made an exception. I’ve waited more than 25 years to see the sassy, funny, extraordinary Sinead O’Connor and tonight I’m going to the Sydney Opera House to hear her live. Her music has helped me through some really tough times and I cannot wait to see her up close.

A FAIRY TALE FOR SINGLE MOTHERS

ARE YOU MY HUSBAND?

A single mother left her babies in the nest with a teenager in charge. The kids screamed so the mother left in a hurry.

So away she went, a long way from the deep dark suburbs.

She did not know what her husband looked like. He might have walked right by her. She did not see him.

Where is my husband?

She looked at the golf course. She saw a sporty young man in a golf buggy. Are you my husband?
The young man just stared at her like she was deranged.

The sporty man was not her husband so she walked on.

Then she came to a pub. She saw a pot bellied drunk at the bar.
“Are you my husband?” She said to the man.
“Me wife kicked me out, I could be your hubby,” he said.
“No, you are a yobbo, you are not my husband.

She came to a strip club. She saw a man who looked sharper than a rat with a gold tooth sitting in a booth.
“Are you my husband?’ she said to the man.
“I could be your husband tonight baby, “ said the man.

“No, you are not my husband, you are a player,” she said.

She looked on the Internet. She found a man whose photo was 20 years old.
“How could you be my husband?” He replied. “I am gorgeous and you are an old cougar.”

“Where is my husband? Where could he be? I will have a husband, I will, I know I will find him”

The single mummy ran, she saw a road worker showing his bum crack. No! He was not her husband. She ran on and on.

She called to a good-looking older man, but he did not stop, he went right on.

So the single mummy went home and when she got to her front gate, the mummy saw a cute man visiting her neighbours.

And they lived happily ever after in separate houses keeping their five children from three different marriages at arm’s length.

A moment so rare

Three short years ago we were dressing up and celebrating your 40th birthday. You were the Queen of the ball that night and now you’ve already left us. And the only way I can contact you is to turn on Smooth FM and wait until a really corny tune comes on and sing my heart out like we used to do together when we were in your car or trying to outdo each other at karaoke. We miss you so, precious sunshine, funny witty friend, devoted mother. I see you when the sun lights up the evening sky across the sea and your songs come on the radio. Shine on beautiful friend, thank you for inspiring me to do good work in the world