I am an artiste

As I attempt to be a full time bullshit artist I thought it was about time my mass of followers received (drum roll) the official Lou Pollard Artist Statement:

Through my work I attempt to examine the phenomenon of Clown as a metaphorical post modern conceptual interpretation of both fart jokes and sad faces.

What began as a personal journey of foolishness, bitterness and procrastination has translated into utterances of profound stupidity that resonate with Fool-identifying white people to question their own meaning.

My mixed media prop laden jokes embody an idiosyncratic view of me as a guru slash hot mess slash cultural icon, yet the familiar imagery allows for a connection between the dominant 21st century archetypes of garden gnomes and junk food.

My written work is in the private collection of Zsa Zsa Gabor’s nephew’s high school classmate who said, ‘fork!, that’s ucken unrool shining Art that is. An’ she’s ‘ucken cheap as.’

I am a recipient of a grant from Centrelink, after they tagged me and released me back into the wild camouflaged as a cougar. I have performed in group shows on Rundle Mall and for staff at the TAB, though not at the same time. I currently spend my time between my gendered bed and bathroom.

In three weeks I’m performing my second solo stand up comedy show at The Factory Theatre, and I’m hoping more than four people and a dog come to see me perform. My show is called Looking For Mike Brady. Hopefully my future husband will be an architect like Mike Brady, because architects earn enough money to support a wife, 6 kids, a live in housekeeper, holidays in Hawaii and a big house. But knowing my luck with men, my future husband will probably be sitting in the audience disguised as a happily married gay man. I’ve written some silly songs and a whole lot of new material and if I can remember all of it I think it will be a great night of laughs. You can buy tickets here: sydneyfringe.com

I’m putting on another solo comedy show for Sydney Fringe Festival in September. My show is called Looking For Mike Brady and it’s all about what a hot catch I am for a wealthy architect (not really). At this time of year I usually look at my script and say to myself, ‘I hate it, it’s not funny, what a load of bollocks, what am I going to be when I grow up?’ But I’ve decided to do my show anyway because it gets me out of the house to hang out with a few friends and drink champers. Please come and see my show, it is yet another of my fabulous single mother get rich quick schemes.

Bring your best laughs to the Factory Theatre in Marrickville (the home of Fringe Comedy) for 2 nights, Wednesday September 24 and Friday September 26

Not suitable for children

I’m performing a show for the 2013 Sydney Fringe Festival on 19, 20 and 21 September called Lou Pollard is Not Suitable For Children. It’s laugh out loud comedy with attitude. Breeders and non breeders welcome.

According to Freud it’s the role of the mother to mess with the child’s psyche and Lou Pollard has been doing her share, from shoplifting to stealing her children’s tooth fairy money. Sensational stand up with a show stopping song finale.

On the first Friday of every month I get together with a bunch of funny chicks and a few lady men and attempt to make people laugh. A lot. My fellow fools and I host Comedy On Tap Sydney at Tap Gallery in Darlinghurst. I’m the youngest child in my family so I’ve been trying to divert people’s anger with my humour all my life. To quote Shakespeare “I was born to speak all mirth and no matter” (Much Ado About Nothing). It’s a laugh innit?

I started doing stand up comedy 15 years ago, back when I only had one children. I supported Arj Barker, went to the Melbourne International Comedy Festival, had loads of fun and got away with perving at a lot of good looking men from the stage. Then I embarked on a more extensive breeding program so I gave up stand up for a few years because I was so sleep deprived nothing was funny. Back when I was performing comedy regularly, a fabulous, strong, feminist lady artist called Pam constantly baby sat for me and ensured that my daughter had a magical time at Pam’s house drawing and painting and visiting art galleries. My teenaged daughter is now an artist because of the love and care and help Pam gave her when she was very small. I’m back doing stand up and I’m putting on a comedy night once a month with good friends at a gallery in Sydney. Pam died this week in a terrible accident and our first comedy night is the night before her funeral. I don’t know how I’m going to be funny in the face of losing my friend. I’ll be looking out into the audience and hoping she’ll be there because she really helped me to follow my dream. Thank you Pammy. 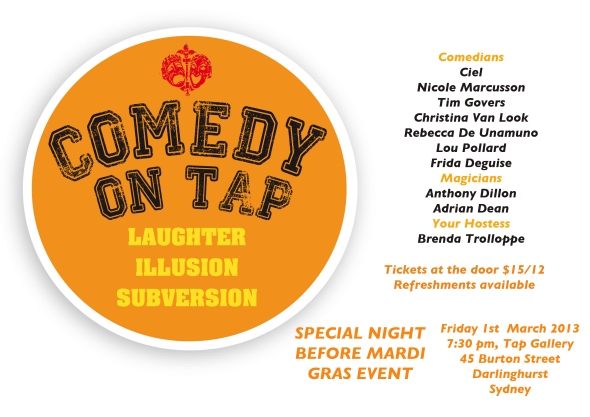 Thank you Phyllis Diller for paving the way for us gals to stand up and be funny. You were one of a kind, thanks for the laughs

One of my favourite female clowns, Lucille Ball, was born today. She had the most marvellous face and superb timing. Lucy was pregnant on television at a time when this was frowned upon by male executives. She was also the first woman in television to be head of a production company: Desilu, the company that she and Desi Arnaz formed. Thank you Lucy for blazing a trail for women in comedy and sharing your gift.

Happy Mothering Sunday. Such a challenging and lovely day. Can’t see mumma today (yet another lockdown) but grateful she’s still with us #mothersday ♥️ #dementia