What an insane year this has been, challenging, difficult, fabulous at times. Lots of kooky things happened in 2013. Apparently astrologically this can be blamed on something up Uranus

In February I lost my lovely friend (my favourite mother in law) and my children lost their favourite grandma in a terrible accident. She was a feisty feminist warrior, an artist and activist and we miss her

I took my munchkins overseas for the first time all together on a family holiday to visit my big brother and we loved it. We had a magical time; boat rides, 1000s of fish, gigantic snails, night markets, turtles, puffer fish, swimming, strange smells, diving, making new friends, eating fabulous Thai food and meeting the marvellous Sister Joan at Presentation Slums Mission in Bangkok. Life is about being with the people you love and telling them how special they are to you

I swam with fish in the Andaman Sea

I kissed a boy and I liked it

When I was MC for North Shore Relay for Life in March I took a bunch of local school kids up to the RNS Hospital cancer ward to sing for the adult patients. So beautiful and so sad. The questions from the kids in the lift on the way down were heartbreaking

I spent the winter writing comedy and workshopping my stuff with the fabulous Ciel. Then in September I had a fantastic time performing in three shows for the Sydney Fringe Festival including a show with my daughters and my solo stand up comedy show

I visited Tasmania for the first time and made great new friends and had a fabulous visit with an old friend. And I went to MONA in Hobart, what an art collection

I spent four days of madness and laughter with my Clown Doctor sisters and brothers and we giggled, played, danced and cheered each other up muchly

Australians got distracted by Twitter and stupid reality TV shows and forgot to hold their political leaders to account on environmental policies. Oops, there goes the Great Barrier Reef and our pristine wilderness

The entertaining children’s author Deborah Abela came to my daughters’ school and ignited a passion for reading in my youngest child. Thank you Deborah

In Australia we had a federal election campaign that went on for 50 years (actually seven months but it felt like a gazillion times that). Australians voted against a vain PM and we ended up with Mr Misogynist refugee hater as our new prime minister

Damn, I forgot to marry for money

Around the world lots of crazy shiz went down:

In Britain there was scandal when the horse meat of the apocalypse was declared the national dish. Foal burger anyone?

Mansplaining became the word du jour for more than a day

More women said ‘enough is enough I can’t go on’ (in the words of Barbra Streisand), and joined the fight for equal pay as feminists the world over marched closer to the imaginary land of Equality

In the US everyone stood near the fiscal cliff and peered over. Except the billionaires who were too busy raping and pillaging the country

In the Philippines a huge storm killed thousands and wiped out entire villages. MSF and many other charities restored our faith in human nature

A celebrity flashed her undies, bought new boobs, had a baby, married her best friend’s personal trainer after stealing him from his fiancee, they got divorced after two days, she adopted seven children from a yak herder in Mongolia and released a perfume line featuring photos of the children in various states of undress (I think). This received more media coverage than unimportant issues like the death of the great Nelson Mandela

Malala Yousafzai celebrated her 16th birthday with an inspirational speech, “We cannot all succeed when half of us are held back”

All in all a wonderful year of chaos

Shakespeare said we must, “unpack our heart with words.”
My name’s Lou and I’m a reader-holic. Reading keeps me sane but I don’t have enough time for all the books I’ve fallen in love with because I let trivial things like work and child rearing get in the way of my devotion to great literature. I’ll read anywhere; it’s not a problem. I take hours at the supermarket because I read every label. I scan the back of the cereal box at breakfast because I’ve taught my children it’s rude to read at the table. But really I’d be reading that too if I didn’t have to talk to them about their day.

My writer dad fostered my devotion to great books, when I was 11 he gave me Hemingway and Steinbeck to read and we talked about their writing. I still remember talking to Dad about the ocean being a character in Hemingway’s book The Old Man and The Sea when I was 12 years old. Books kept my dad’s mind alive through his deprived childhood and he treasured the craft of good writers. 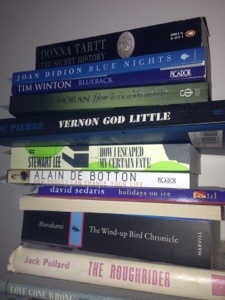 This is a photo of the current to read pile beside my bed. The book at the top is what I’m reading right now. The one at the bottom is by my dad. My dad wrote or edited over 100 books. Reading is my family’s addiction of choice. There are so many books and so little time. When I’m really, really old I’m going to live in a house filled with furry dogs and books and an open fire. The dogs will force me to get out of the house to walk them otherwise I’d stay inside reading and never see the sun. You’re never alone when you have a great book to read. Henry David Thoreau said,
“Books must be read as deliberately and reservedly as they were written.”

But my favourite quote on reading is from Lemony Snickert:
“Never trust anyone who has not brought a book with them.”

You think that their