Dear father who art in heaven

Happy 93rd birthday. Today I wish your body had stayed around longer. You were a devoted da and a workaholic. I love you Jack Pollard. You taught me:

*A good swim in the ocean can clear your mind

*Hard work is good for the soul

*A tough childhood doesn’t define the rest of your life

*Even if you haven’t had your own dad, you can achieve a lot

*Dancing a slow tango in the kitchen is magical

*A full fridge means you are doing really well

*Stray dogs are worth rescuing

*Love is a verb

*Saying yes to new adventures is scary but

*Everyone looks good in a snappy suit

17 long years without you have gone by in a flash. I would sacrifice a few of my fingers and toes to see one of your cheeky smiles, hear your laugh and have a hug.

My dad was the Prince of Kings Cross Posted: June 22, 2019 | Author: loupollard | Filed under: AUSTRALIA, Self improvement, Uncategorized | Tags: Australian rugby, bigots in the belfry, crowd funding, fake christians, fundamentalist Christians, go and fund yourself, god botherers, hate speech, Israel Folau, Justin Bieber, liars, rugby, thieves in the temple, what would Jesus do | Leave a comment
For all the times that you put down my gay friends
And all the clubs you used to fund your own ends
You think rugby will be lost without you, oh Iz for goodness sake
You think we’re crying ’cause you stopped playin’ well we ain’t
And I didn’t wanna write these words ’cause I didn’t want you thinking we still care about you ’cause we don’t but, you still hit our socials up
And Izzy we’ve moved along and I think you should too
I don’t wanna hold back, maybe you should know that,
Aussies don’t like you and we like everyone
And you for-profit-Christians won’t admit when you are wrong
You get so caught up in your hate, you can’t see what’s going on
But now we know, you’re better playing on your own
‘Cause if you like the way you play that much,
Well Izzy you should go and fund yourself
And if you think that we’re still holding on to you
Well you should go and fund yourself
And if you think hate speech has a place right now
Well Izzy you should go and fund yourself
And if you think you bigots deserve a voice
Well you should go and fund yourselves
Well haters you should take a long hard look in the mirror because Jesus wouldn’t be paying lawyers, he’d be funding homeless people and women who have suffered DV and sick kids and people who need a hand
So Israel Folau run away with your bigoted god bothering pack of fundamentalist and go and play with yourselves

On Friday, the Stephen Bradbury of the Liberal party Scott no friends Morrison made the worst International Women’s Day speech in the history of forever.

Simple Scotty said that men should not have to make way for women’s empowerment.

“We’re not about setting Australians against each other, trying to push some down to lift others up,” Morrison told a function organised by Australia’s mining industry.

What I love most about Scott no friends’ latest idiot utterance is that Labor don’t really need to do anything during this election campaign. Scott has placed his feet in concrete boots and the LNP ship is sinking faster than the rats can run. And it’s all his own doing.

As a rugby league man, Scotty the super fit sporty PM may not understand the concept, so here is the dictionary definition of ‘own goal’:

1. a goal scored when a player inadvertently strikes the ball into their own team’s goal.

• INFORMAL•BRITISH
an act that unintentionally harms one’s own interests.

Just when the Australian people thought that Tone deaf Abbott defending a paedophile was beyond, along comes good old boy Scotty to make sure they’ll be in opposition for a long time. As we say in the land of Oz, “hold my beer.”

Now that you’ve stopped the votes, where the bloody hell are you retiring to Scotty? Time to book your place at the Hillsong happy clapper home for bewildered dinosaurs 🦖🦕

In 2017 I was lucky enough to visit Italy and I went on a tour of the Vatican. The impenetrable wall around Vatican City and numerous security cameras screamed inclusiveness to me. In the Vaticano museum, there are priceless works from an immense collection built up by Popes throughout the centuries, including some of the most renowned classical sculptures and important masterpieces of Renaissance art in the world. They own paintings by Leonardo, Van Gogh, Raphael, Picasso, Chagall and Dali for God’s sake. Why won’t the Catholic Church sell some of these artworks and antiquities to help the victims of child abuse by their priests? Or perhaps the world’s starving and homeless? When the gap between rich and poor has never been greater, why are ‘good Catholics’ paying for statues to be made and shipped from all over the world to an already over-stuffed museum? They could wipe out a generation’s problems with a few garage and property sales around the world. So why don’t they?

My visit was a few days before Pell was charged. After his arrest, in St Peter’s Square there were polizei, army and carabinieri on every corner and tourist monument. Pell was hidden away. Who could blame the poor victims who for years were ignored, if they decided to revolt against these monsters in power?

20% of Christian brothers are guilty of perpetrating or covering up child abuse. The Catholic Church pays to protect paedophile priests but argues over paying compensation to their victims when money for shelter and counselling could alleviate the suffering of those whose childhoods were robbed by sick perverts.

The Australia-wide Royal Commission into Institutional Responses to Child Sexual Abuse delivered its final recommendations in December 2017. More than 60,000 abuse survivors came forward. The suicide rate amongst males in Ballarat (Pell’s home city) is twice that of Melbourne. But still, some in the Catholic Church believe that their religion is being unfairly targeted. This is the organisation where all serving archbishops told the royal commission they would not report to police a colleague who admitted in the confessional to child rape.

And scumbag journalists with zero credibility defend them. 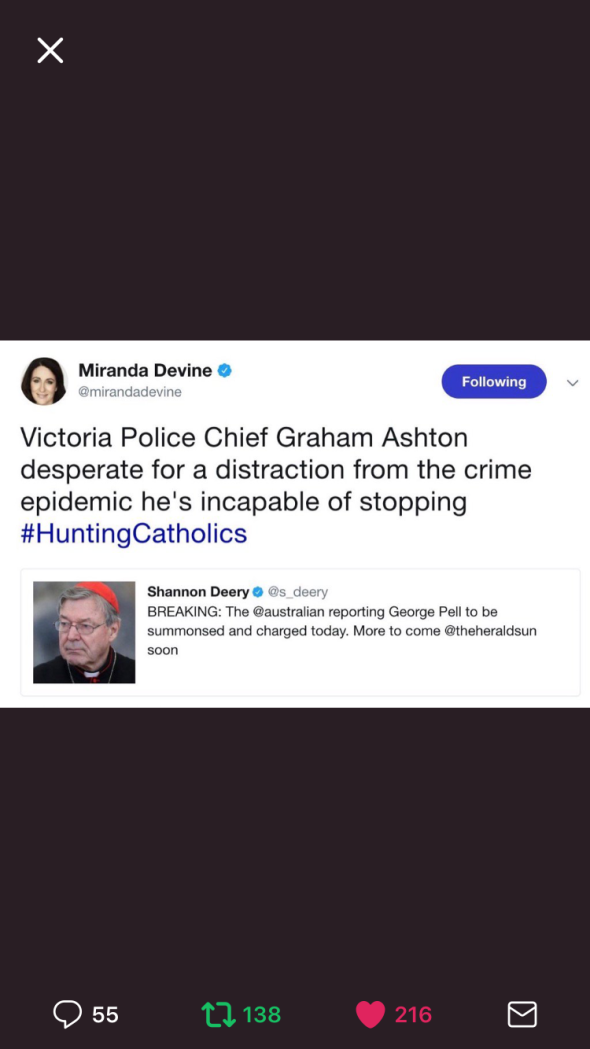 Members of the media who defend child rapists must be sacked. And a truly visionary pope who wanted to help victims would be a great start.

The church asked Catholics to pay for Pell’s defence team, they helped Pell raise money but try to avoid payment to victims. They initially refused to put in an interim care scheme and a lot of the Catholic diocese’ say they ‘intend’ to sign up for the redress scheme, despite lobbying government to cut it down. Something is seriously wrong with this supposedly moral institution. It’s almost as if paedophiles (and alleged paedophiles) are taken care of but not the victims. Jesus would kick these greedy money lenders out of the temple.

“And Jesus went into the temple of God, and cast out all them that sold and bought in the temple, and overthrew the tables of the money changers, and the seats of them that sold doves, And said unto them, It is written, My house shall be called the house of prayer; but ye have made it a den of thieves.”

What the Catholic Church is really worth

I don’t watch much television, but the current top rating show coming out of Washington has me shaking my head in wonder at the scripting and production values. There is not enough animation, and Donald J Trump in the starring role of lead narcissist is too cartoon-like to be real. His skin is too orange and his suits too ill-fitting to be presidential. I’m starting to think that the US TV and movie-making industry has inflicted on us the most bizarre reality show the world has ever seen. We have been tricked into thinking that schlock TV favourite Donald Trump is actually the president of the United States. The wife who is only trotted out for photo opportunities role played by Melania adds drama, but her acting skills aren’t great. Through incredibly staged press briefings we have been lead to believe that the Orange Creep’s handbag designing daughter Ivanka is a foreign policy adviser and that this bizarre family actually sometimes live at the White House.

There are some great episodes of the show. The Singapore scenes with the actor playing a North Korean despot were brilliantly staged, despite the lack of plot resolution. And I do love Nancy Pelosi in the pivotal role of lead shit stirrer. Her cameo at this week’s State of The Onion address must be nominated for an Emmy award and a Nobel Prize.

In an era where white trash families and country bumpkins dominate our television screens, the Trump family are reality TV royalty. Candid Camera started this trend but it may be time to stop giving idiots so much air time. The Loud clan were the first reality TV family, let’s hope the Mar-a-Lago Trumps are the last. Honestly America, it is time to take out the trash. Bigly.

Back to school joy

In 2019 I am transforming into an alert single mother because my child will be alarmed. No more teen tantrums to endure! I’ve decided to send my wandering youngest child to school in China, where she can wear a lovely new uniform. Even thousands of miles away I can easily track her whereabouts. I need to find a translator so I can read her school reports.

Big mother will find you #beyondtheschoolgrounds 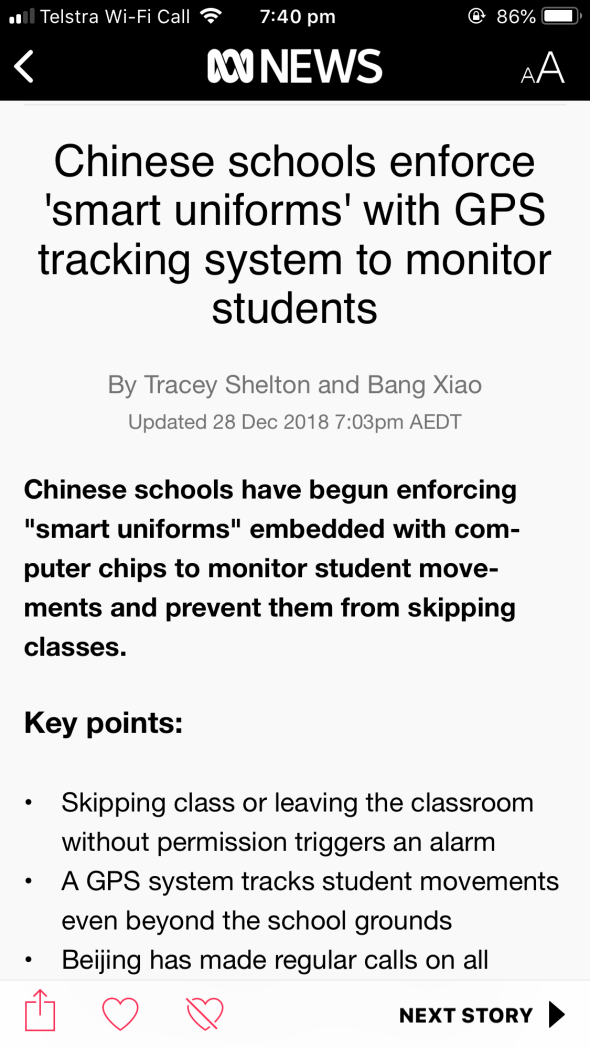 Vinnies and Salvos may not agree but I’d like to say,

I laboured through a summer party with pill popping friends who became obnoxious, so this year I won’t be answering their calls

Folding up Dutton, Morrison and Abbott at the next election will help my thoughts become clear

Parking cops don’t speak to my heart, out they go

Throwing out “joyless” items originally struck me as a first world problem. But the end result may be that the world is made better

Hardly any bottom of the budgie cage seeds on my veggies

An absence of life hacks

A teaspoon of resolutions

A plethora of politicians who think before they speak

Truckloads of hot firies turning up at work

Summer in Straya – a few of my favourite things:

Burnt veggies on the barbie

Oldies bitching about toddlers having public meltdowns. Who doesn’t love a good tantrum?

Mango dribbling down your chin

Found a potato on the couch #cats ❤️